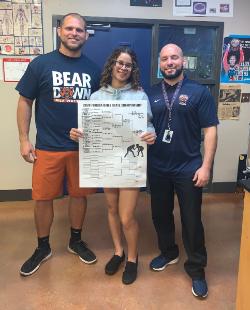 In the deepest bracket of 128lbs at the 2020 Florida Girls State Championship, Carolyna Bellon went on a dominating run finishing 6-0 pinning five of her opponents en route to capturing her first state title.  After being seeded fourth in the bracket, Carolyna knew she had something to prove.  When asked about her seeding, Carolyna replied, “I did not care what I was seeded or ranked coming into the state tournament.  I knew I was there to win it no matter where I was placed in the bracket.” She not only finished with most pins in the entire tournament, but also compiled the most team points as well out of all competitors.  In the finals match against Paige Kalish from East River, the score was knotted at 3-3 with 45 seconds left when Carolyna threw her opponent to her back scoring four points putting the match out of reach.  As the clock struck zero, the final score was 7-4 in favor of Carolyna.  “The feeling was unreal.” Said Carolyna. “All of the years of hard work I put into this sport was all worth it when I came out on top in the finals match.”  Carolyna became the second wrestler to win a state championship for the Bears following Nick Luna’s state title in the 120lb weight class last season.