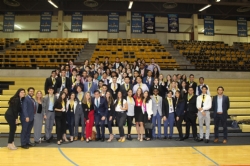 MLA's FBLA won 76 medals at their district competition and now move onto the State Leadership Conference.

Mater Lakes Academy’s FBLA members competed at their first District 25 competition on January 10th, 2020 at Johnson and Wales University. They had 43 presenters for that day and review of the pre judged projects also took place. Then, the members went to Mater Academy High School to continue the competition which they had 36 students test and present on January 11th, 2020. After competing, the FBLA team waited patiently until January 17th, 2020 to attend the award ceremony at the Miami Dade College Kendall Campus for the results.  The wait was completely worth it as they found out that MLA FBLA had 76 won medals; 32 members in first place, 36 members in 2nd place, 5 members in 3rd place, and 3 members in 4th place.  Besides the medals won from those who tested and presented, five of the members competed in the Parliamentary Procedures. The group took 2nd place, but Jahlanny Morrobel received the highest qualifying score in the district on the exam. Therefore she became the District 25 Parliamentarian Officer. For their first competition, they exceeded expectations. A huge congratulations to MLA’s FBLA and wishing them good luck on their next endeavor in Orlando, FL for the State Leadership Conference.