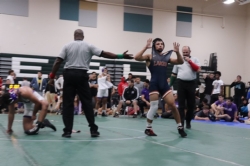 This past weekend marked the official start for the FHSAA High School Wrestling season. Senior Eric Temes and Junior Carolyna Bellon both finished an undefeated 4-0 to capture titles in each of their weight classes.

Carolyna Bellon traveled to University High School in Orange City, FL to compete in the Clash of the Titans Lady Tournament.  In a field of 18 other women wrestlers at the 128lb weight class Carolyna managed to finish 4-0 pinning all opponents to capture first place.  Carolyna is currently ranked number 1 in the state at her weight class for Florida Womens Wrestling.

The next tournaments coming up for the Bears include overnight trips to Hagerty High School in Orlando, FL for a big 3 day team dual tournament December 19th through the 21st , followed by the Knockout Christmas Classic at Osceola High School in Kissimmee, FL December 27th and 28th.  The Knockout Christmas Classic brings in over 40 teams from all over the country and is regarded as one the toughest high school wrestling tournaments in the nation.