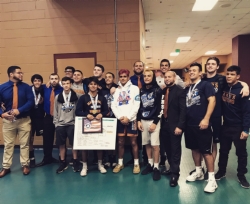 Congratulations, to our wrestling team that finished as the fourth place team and a state title.

The Mater Lakes wrestling team made history this weekend at the FHSAA State Tournament in Kissimmee, FL with a fourth place team finish.  The Bears sent two wrestlers to the state finals for the first time in school history when Senior Nick Luna defeated Bas Diaz of Citrus Park Christian and Senior Omar Armengol defeated Alan Morano of Tampa Prep to win their semifinals match.  Nick Luna became the school’s first state champion when he defeated Vincenzo Napolitano of American Heritage Delray to capture the 1A 120lb weight class title in dominating fashion. Luna built an early lead and never looked back as he won with a score of 9-4.  Armengol started the tournament on a tear pinning his first two opponents in the early rounds and was on the verge of an emphatic comeback in the final, but lost a very tight match in the 132lb bout as he was in the process of scoring a possible match winning takedown as time expired.  He joins Luna as the only other wrestler to make it to the state finals match.

Three other Bears achieved milestones as they reached the placing rounds with exciting wins to qualify as state place winners.  Senior Nestor Nunez took home fourth place in the 160lb weight class. After a tough loss in the quarter finals, Nunez battled back with three straight victories.  Two of those were come from behind wins symbolizing his resilience.  Senior David Alvarez captured fifth place in the 195lb weight class with two dominating pins along the way.  Eight grader Danny Martinez placed fifth in the 106lb weight class losing a tight bout in the quarter finals, but following it up with a pin and a technical fall in the consolation rounds.  Prior to this season, the Bears have only had two other state place winners in program history.

Four other wrestlers competed at the State tournament but came up just short of reaching the placing rounds.  Seniors Rafael Alvarez (138lb) and Danny Rodriguez (220lb) each won exciting matches but came within a match of making it to day two.  Sophomore Gonzalo Perez (126lb) also had an exciting win and sophomore Justin Zerbinati (113lb) got some much needed experience for next season as they competed at the state tournament for the first time.

Coaches Brandon Neifeld and Jonathan Ramsey will be working during the off season with their new USA Wrestling Club (Golden Bears).  The club will be open to all wrestlers in the community as long as they have a current USA Wrestling Card and is available for athletes ages 5-18.